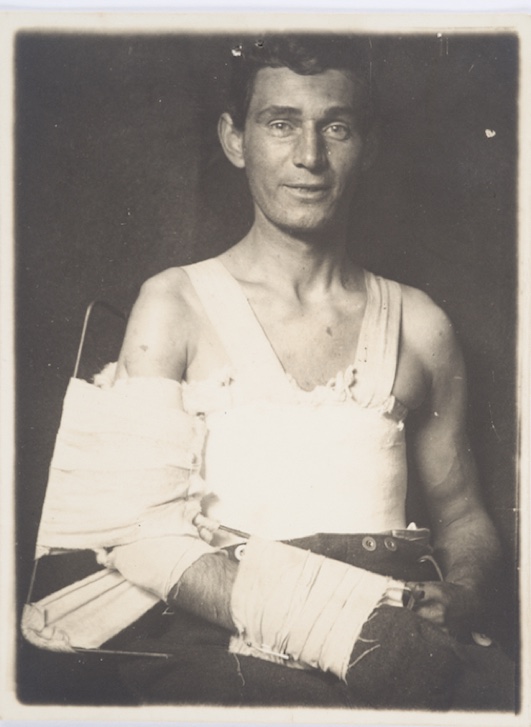 Hilda Harris commenced as a first-year student at the University of Sydney in 1916. She joined fifty-one students in that year. During the First World War the then Australasian Massage Association, (the association that later and appropriately changed its name to the Australian Physiotherapy Association), with the Universities of Melbourne, Sydney and Adelaide offered shortened one-year courses.  These courses would provide partially educated physiotherapists with knowledge of the basic biomedical sciences and one element of physiotherapy practice – remedial exercise, electrotherapy or massage.

By 1915 Australians had seen the reality of war. Hundreds of maimed and ill men were returning home on hospital ships. Rehabilitation hospitals, established often in requisitioned or donated mansions with substantial gardens, soon mushroomed with Nissen huts to house these veterans. The graduates of the shortened courses, under the guidance of fully qualified physiotherapists and the medical staff, helped to rehabilitated the repatriated men.

But Hilda was one of only twenty of the first-year students who progressed to second year in 1917. She had to successfully complete the second year of the course in order to practise as a fully qualified physiotherapist.[2] Unlike most middle-class women of this era Hilda needed to work. She had a family to support as a single mother.

Hilda Irene Gidley Fleming was born in Hobart town in 1881. Both her grandfathers were convicted for theft and transported as convicts to Tasmania. In Tasmania they improved their lot in life but the convict stain remained. Unlike present day Australians who are proud of a convict ancestry, at the turn of the twentieth century such an ancestry could ruin a young woman’s chances of marriage into a ‘good’ family. The Flemings moved to Sydney where, in 1907, Hilda married Charles William Harris, a civil engineer. In 1912 with their three young children Hilda and Charles went to Fiji, where he was to work for the British Government building a wharf. In 1915 Charles was accidentally killed on the wharf. Returning to Sydney with her three children still aged under seven, Hilda completed her physiotherapy course. Her family assisted with accommodation but Hilda still had to help pay the rent!

Hilda travelled by public transport to treat her patients around Sydney. Later she worked at the Royal Alexandra Hospital for Children. When she retired aged fifty-four in 1935, the hospital recognised her long service with an illuminated address.[3]

A pioneer as a working professional woman and a single mother, Hilda died on 30 April 1944 in the family home Saintonge, in Hunters Hill, New South Wales, when the threat from the Second World war was not far away.

Professor Joan McMeeken AM is the Foundation Professor and was Foundation Head of the School of Physiotherapy and Associate Dean Faculty of Medicine, Dentistry and Health Sciences at the University of Melbourne from 1991 to 2006. She is a Professorial Fellow of the University. Her previous research and clinical interests included physiotherapy education and accreditation, health promotion and health management through education, injury prevention and rehabilitation. She continues to play a major role in the recognition, registration and accreditation of university and tertiary academic programs in Australia and internationally, now with the World Confederation of Physical Therapy. Her current historical interests include work on a current Australian Research Council grant, Diggers to Veterans: Risk, Resilience and Recovery in the First Australian Imperial Force and the history of the physiotherapy profession. In 2018 her book Science in Our Hands Physiotherapy at the University of Melbourne, 1895–2010 was published.