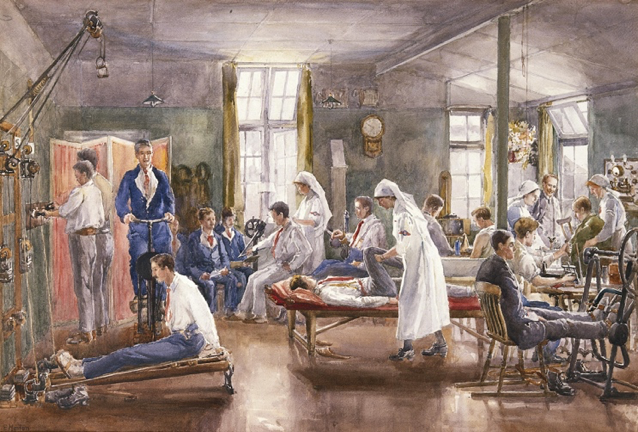 We are well accustomed to photographs of World War I physiotherapy wards. Busy rooms, filled with rehabilitating soldiers offer a glimpse into a past world and the beginnings of a new profession. In contrast, a painting of the very same scene offers far greater insight, as we get to see what the artist of the time believed the scene should look like. The sum of the artist’s expectations provides the opportunity to learn much more of the time.

The painting Physical Therapy at Bath War Hospital, a watercolour by Australian-born Sarah Elizabeth Roberts Horton, is a unique record of one of the best-equipped rehabilitation facilities in a British war hospital during WWI. It depicts the interior of Q Block at Bath War Hospital in South West England where injured soldiers received massage, mechanotherapy, electrotherapy, hydrotherapy, and light therapy.

Physical Therapist Heide Postges recently published an analysis of the painting that puts the early developments of rehabilitation practices into historical context, so that we may take a critical look at the underlying principles of rehabilitation that are often taken for granted today.

Postges’s analysis commences with a contextual review of the artist, the War, and the Bath War Hospital. Additional information was found on the back of the painting, held at the Wellcome Trust Library in London, where three photos and 13 workshop drawings of gymnasium equipment manufactured in Bath were attached. 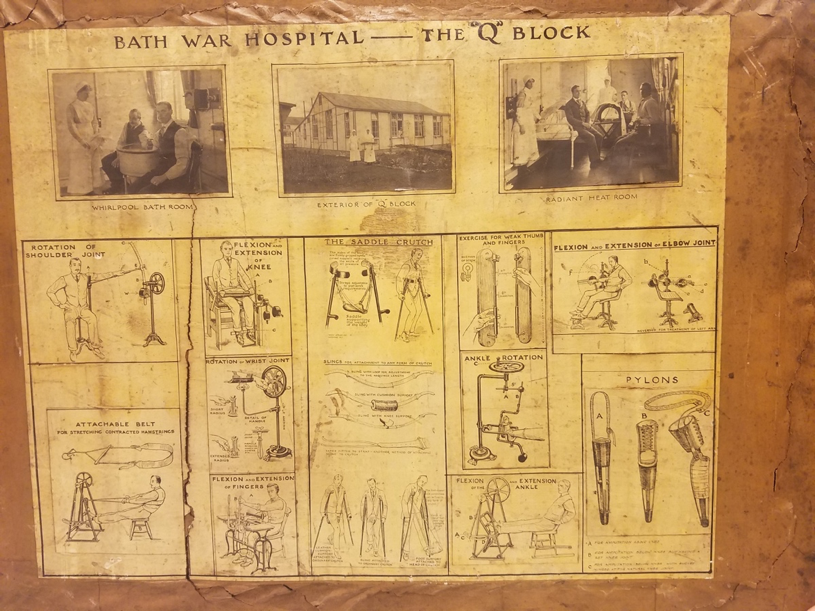 Based on the poses and positioning of the subjects in the painting, Postges believes that the scene is a compilation painted from previously published photos.

Postges suggests that the watercolour serves as a visual record of the involvement of medicine in warfare and that it emphasises normative heroic ideals of manliness – active, brave and courageous.

The soldiers are focussed on their tasks of recovery just as the nation must be, suggesting that the painting also served as a piece of patriotic propaganda. Although weakened by their injuries and in the care of nurses and therapists, the neutral expressions of the soldiers draws attention to their putatively ‘masculine’ traits of courage, resilience and ongoing sacrifice.   It is a ‘healing aesthetic’, in which the strong body and mind help the nation as a whole come to terms with the consequence of the war and the necessary reconstruction of civilization.

Nevertheless the central position of two nurses and their active, commanding stance over their male patients represent the pivotal role of women in war medicine. A feminist painting, it contradicts the more common view of the nursing discipline as a profession of lower status than the male dominated medicine.

Postges says that the use of muted, warm colours creates a harmonious effect and the sunlight coming through the windows is perhaps a visual reference to healing attributed to the three natural remedies of air, sunlight and water. In contrast, the state-of-the-art equipment shows the potential of technology to heal as opposed to causing destruction and violence.

Through her analysis of Physical Therapy at Bath War Hospital, Postges urges us to take a closer look at how political developments and social expectations have informed rehabilitation practices.

Postges, H. 2019. Physical therapy at Bath War Hospital: Rehabilitation and its links to WWI. Journal of Humanities in Rehabilitation.  Published online at

Physical Therapy at Bath War Hospital: Rehabilitation and Its Links to WW1