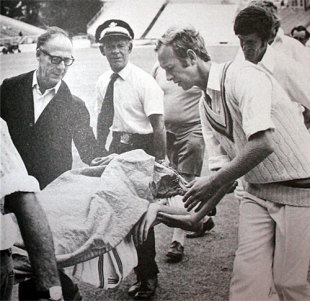 Physios are like goal keepers and umpires: you don’t notice the good ones.

A shell shocked and broken England cricket team was touring New Zealand in February 1975 for a two match test series.  Having just faced the fearsome pace attack of Dennis Lillee and Jeff Thomson in Australia and losing the Ashes Series 4 – 1 the English were keen to make amends.

The first match began in Auckland. England batted and made the best of the opportunity by scoring a mammoth 593 runs for the loss of 6 wickets, declared.  New Zealand could only respond with 326 in their first innings and so were forced to follow on.  In an almost repeat of the first innings New Zealand lost wickets at regular intervals in their second innings.

The English could smell victory with New Zealand having one wicket remaining and still requiring 104 runs to make England bat again, until bad light brought an early end to the fourth day’s play. A rest day was scheduled between the fourth and fifth days, so the frustrated English players, and everyone else, had to wait another two days for a result.

On the fifth and final day poor weather was forecast. The pressure was now on England to get the early wicket and bring the game to a conclusion before rain ended play prematurely, allowing New Zealand to salvage an unlikely draw. 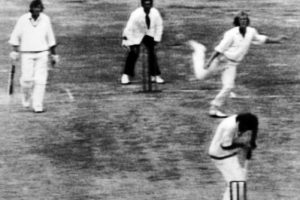 The day began with the final two batsmen managing to hold out, frustrating the English bowlers. Pace bowler Peter Lever decided to test the number ten batsman, Ewen Chatfield, with a bouncer (a short delivered ball that rises quickly up into the batsman’s body, forcing him onto his back foot). At the time helmets and other now common protective gear were not in use. The ball deflected from Chatfield’s bat and struck him on the temple.

“I lost sight of it and I knew it had hit me on the head,” Chatfield recalled, “For a few seconds I staggered and then fell over.”

The players watched helplessly as Chatfield convulsed on the pitch.

Bernard Thomas, the England physiotherapist, sitting in the stand, didn’t immediately react – “I was aware I was a guest and it was a New Zealand Cricket situation” – but, as it turned out, there was no doctor on the ground as the organisers had believed that as a swift finish was expected and that medical support was not needed. Thomas, however, was alerted by calls from the players and sprinted onto the field, accompanied by a local ambulanceman.

Chatfield had swallowed his tongue. According to Thomas, “It was the worst case I have seen and I never want to see another. His heart had stopped beating and technically that’s the sign of dying.”

Thomas reached in and flicked the tongue back into place and managed to revive Chatfield with heart massage and mouth-to-mouth resuscitation.

An unconscious but stabilized Chatfield was taken from the field on a stretcher and rushed to hospital, where a hairline fracture on his skull was detected.

It was a bizarre scenario for the English bowlers, especially after being soundly beaten by the Australians in the Ashes. Henry Blofeld in the Guardian wrote: “It was the final and appalling irony that one of the England bowlers, who had ducked and weaved himself through Australia, should himself have come very close to killing Chatfield.”

The incident gave birth to a worldwide and still ongoing debate on the legitimacy of bouncers, especially those aimed at tailenders (typically less skilled batters). However a couple of years later helmets were introduced into cricket and Chatfield wore one thereafter.

Chatfield went on to play 43 Tests and 114 One Day Internationals for New Zealand and was later awarded an MBE. He continued playing cricket competitively until he was 68 years old. Of Thomas he said. “It was a good job he was there that day or I wouldn’t be around today”.