The waters of Bad (Bath) Ragaz, Switzerland enjoy a long history of healing, which began in 1240 when hunters from the local monastery discovered an extraordinary warm thermal spring in the Tamina Gorge, close to the nearby Mountain town of Pfäfers. 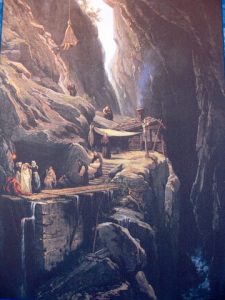 Lowered into the gorge to reach the healing waters

Bathing activities started soon afterwards by drilling bathtubs into the rocks of the narrow gorge. Pilgrims journeyed to the Abbey of Pfäfers to bathe in their thermal waters. Because of the dangerous entry, spa guests were lowered down into the gorge on ropes and would soak for 6 – 7 days continuously until they developed open sores on their body – a sign (they believed) that it was working.

In 1535 the doctor and philosopher, Paracelsus, testified to the healing powers of the thermal springs, which due to the water’s low mineral content and temperature of 36.5°c, was regarded as a warm spa. Thus began the age of spa tourism.

In 1630 the water was funneled 450 metres in wooden channels to the outlet of the gorge and in 1716 the earliest baroque bathhouse in Switzerland was built below the Benedictine Monastery in Pfäfers.

Despite the great difficulties of travel at the time, the mineral spring became an important destination for countless people longing for better health.

Demand increased, such that in 1840 the thermal waters were being piped down the mountain to the more accessible town of Ragaz, four kilometres away in the St Gallen Rhine Valley. Participants would sit in the waters for hours to find the cure for their physical and mental complaints and luxury hotels sprang up to accommodate wealthy travellers.

In the first part of the 20th century, as knowledge about the medical benefits of exercise began to evolve, physiotherapists started using the waters to actively treat patients with peripheral lesions and decreased range of motion. They would bind the patients on plinths in the water to provide resistance to their movements and simple one-dimensional land-based movements were performed in the warm water.

In 1957, the Wildbader exercises of a German physician called Knupfer were brought to the thermal spas. Knupfer developed exercises in which the patient was supported by rings or floats around their neck, arms, pelvis and knees while lying horizontally in the water. Knupfer felt that the hydrodynamic and thermal properties of the water, combined with unique non-weight-bearing exercises, would promote excellent patient results.