The following edited excerpts are from the article titled “Preserving our Past: Why physio history matters”.  It was published in the Australian Physiotherapy Association’s (APA) InMotion Magazine on 3 February 2020 and describes the current status of physiotherapy history activities throughout Australia.  The full article can be accessed here.

Throughout history, Australian physiotherapists have been leaders in their field and have agitated for change that helped shaped the profession domestically and internationally. So why has the profession been so neglectful of its past?

The volunteers of the Victorian Retired Physiotherapists group had only been working away for a little under an hour when they unearthed their first gem from a treasure trove of Australian physiotherapy history. Among the faded old photos, the tattered papers and the bound documents surfaced a copy of the minutes from the first annual meeting of the Australasian Massage Association from 1907. The Association had formed the year before, in 1906.

In the tightly typed pages from the meeting at the Royal Exchange Hall in Sydney on 25 April, the Association’s secretary, Frederick Teepoo Hall, discusses why the association has opted to hire a typewriter rather than buy one outright. ‘We cannot get a typewriter for nothing, and so we have to hire one. And no typewriter company in Victoria will let you have a typewriter for less than five shillings a week!’ he declares.

It is but a tiny glimpse into the very earliest machinations of the association, which became the Australian Physiotherapy Association more than 30 years later.

On this day that InMotion observes, the contents of the box the volunteers are examining include a collection of papers and materials that are a window into a bygone era. The dozen or so retired and passionate physiotherapists sorting through the materials at the APA’s national office in Camberwell, Victoria, are compiling and stacking papers, the bound books and bits of memorabilia into various piles for further classification.

Back in 2012, the APA commissioned professional archivists from The University of Melbourne to undertake a stocktake of all the materials held in the Melbourne storage facility (which holds some materials sent in from other state branches). At that time, the archivists commented on the fragility of the documents and the poor quality of their packaging, meaning time was an important factor, especially for the oldest of the materials.

While the volunteers are certainly making inroads in many regards, part of the challenge has also been in funding the huge undertaking. And another big challenge has been that each state branch needs similar dedicated volunteers to take up the mantle in their respective state—and there are several branches yet to attract those volunteers. Each state has its own history, which is not only told through the many documents, books and minutes gathered but also in the collective memory of the doyens of the profession from those regions. 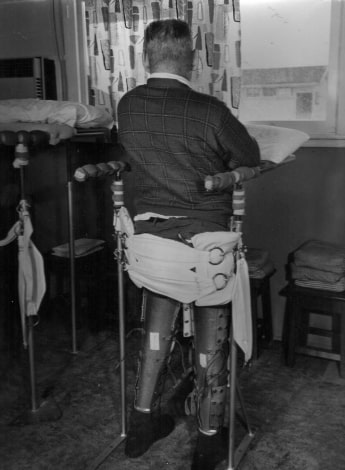 An early physiotherapy tool, the caliper stand frame, in use in the Royal Adelaide Hospital.

Speaking of the past

In recognising that steps need to be taken now to record more oral histories from the leaders of the profession while they are still alive, a template has been created that the Victorian Retired Physiotherapists group offers to the other states, should they be in a position to undertake the recordings.

Similar to the work being undertaken in Victoria, the APA South Australian branch has retained much of its history in storage; the vast collection of images, handwritten and typed notes and meeting minutes have been scanned and file. In South Australia in the 1980s, a number of oral histories were taken. At that time there were some really outstanding physiotherapists who had contributed so much, not only to South Australia but also nationally and internationally, including the man considered the ‘father of manual therapy’, Geoff Maitland (1925–2010).

While there is evidence of a renewed zeal for preserving the profession’s history around the time of the APA’s centenary—with a flurry of work being undertaken in most states in the two decades from the 1980s to the year 2000—the ensuing decades have seen a marked decline in the levels of enthusiasm previously reached. Most of the progress since has been at the hands of passionate and dedicated physiotherapists who are retired or semi-retired, and who share a common goal despite being in disparate locations around the country.

APA Honoured Member Gwen Jull, in Queensland, is the deputy chair of the Queensland Retired Physiotherapists Group, and she has been involved in charting the profession’s history, in particular the history of education at the University of Queensland (UQ), for many years. Gwen, with Prue Galley (who, in 1975, wrote the case for first contact status for physiotherapists) and Elaine Unkles, compiled a history of physiotherapy at UQ for the university’s 85th anniversary in 2017.

‘The materials collected look at the history of physiotherapy in Queensland literally through the lens of UQ being the first full [physiotherapy] university course both in Australia and in Queensland.  We have many photos, documents and stories of life as a student as well as the evolution of physiotherapy education and research at UQ.’

‘Most things are not brand new. I think we can learn a lot by looking back.’ – Joan McMeekan

‘The history hasn’t been discussed enough. Events such as the first contact ethic that happened in ’76 should almost be a compulsory lecture for undergraduates, it was such a watershed event. I think that if you surveyed all of the current physio students, none or few of them would know about Geoff Maitland for example, yet he was one of the greatest leaders in physiotherapy in the ’60s, ’70s, ’80s nationally and internationally,’ she says.

Her sentiments are echoed across in Western Australia, where physiotherapist Glenn Ruscoe, FACP, laments that unlike physiotherapy, most other professions use their history as a form of validation. ‘We not only ignore ours, we actively shun our history,’ he says. They are strong words, however Glenn, who is on the executive of the International Physiotherapy History Association (see previous page), believes the physiotherapy profession is unique in that it has largely turned its back on its own history.

‘It is a shame, because history helps us work out how we came to being where we are. In every single profession, the first unit taught at universities is on the history of the profession. There’s not a single unit taught in any institution in the world about physiotherapy’s history,’ Glenn says. ‘We don’t write about it. We don’t celebrate it. If you look at medicine, for example, they have conferences on their history. We haven’t had any.’

Over in New South Wales, retired physiotherapist Barbara Dorsch, the chair of the Physiotherapy Emeritus Group (PEG), says there is a collection of materials, including many books and documents, that the group has an interest in preserving for the future generations. The group, which now has more than 80 members, has three lectures a year at the Australian Catholic University at North Sydney. These lectures are open to any physiotherapist, and topics cover all manner of historical and present clinical practices, research and academia.

‘Physiotherapists today benefit from the pioneering work done by previous generations of practitioners, academics and leaders in the field.’ – Maree Webber

In Tasmania, there is a similar need for volunteers to help gather a more comprehensive oral history of physiotherapy, says Maree Webber, FACP, in order to provide an ongoing living history of the profession in the state. After reading The Path to Professionalism, a definitive book that traces the history of the APA to 1984 that was written to mark the APA’s centenary in 2006 , Maree developed a passion for the history of physiotherapy, and was reminded of the wonderful physiotherapists she had worked with in Tasmania in the ’70s and ’80s who have since died.

‘In speaking with younger physios in Tasmania in the past 10 to 15 years, it is clear that these once- revered and everyday names of leading physios, who were such great mentors and practitioners to so many early- career physios, were not known to the current generation.

‘Physiotherapists today benefit from the pioneering work done by previous generations of practitioners, academics and leaders in the field, both in paid work and volunteering their time to deliver a profession with huge scope of practice and a solid evidence base, from its humble beginnings.

‘This did not happen by chance but by hard work, including huge input via volunteering, in establishing and supporting the profession through the APA branches, in hosting national and international conferences and supporting PD and networking events and mentoring young physios,’ Maree says. ‘We have arrived at our privileged position today through the hard work and ongoing effort of all those who have gone before. We need to preserve this privilege and heritage and build on it to continue to benefit future generations of physiotherapists.’

Back in Melbourne, Joan McMeeken has published a history of physiotherapy at the University of Melbourne where Australia’s formal physiotherapy education began in 1906. She hopes that the key materials the APA holds are looked after in a proper archive so that the lessons from the past can benefit future generations. Joan and members of the APA Retired Members group recently met with APA Chief Executive Officer Anja Nikolic to discuss how best to progress the preservation of the profession’s past for the future.

‘You see mistakes being made that have been made before and unless you have some idea of what the resolution was for these things, they’ll keep on happening,’ Joan says. ‘Most things are not brand new. I think we can learn a lot by looking back.’