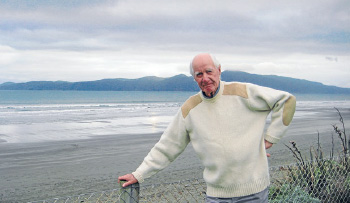 Robin Anthony McKenzie was born in Auckland in 1931. He was educated at Wairarapa College, spent his student years at Otago University, and graduated from the New Zealand School of Physiotherapy in Dunedin in 1952. In 1953, he started a private practice in Wellington, and it was here that he developed a special interest in treating spinal disorders.

The McKenzie method has its roots in a single event in 1956 that led to increased experimentation of certain movement in order to elicit what is now known as the centralisation phenomenon. A patient who was experiencing pain on the right side of his lower back buttock, laid down on doctor McKenzie’s treatment table. The patient ended up lying in significant lumbar extension for around five minutes, meaning his back was bending backward because the head of the table had been raised for a previous patient. After ceasing this sustained position in lumbar extension the patient noted the pain on the right side of his body had experienced surprising and significant improvement.

This led McKenzie to continuously experiment with specific movement and movement patterns to treat chronic lower back pain and bring about centralisation of pain symptoms. Over the years of experimentation in Robin McKenzie’s career, he noted patterns of symptom relief in response to prescribed spinal movements and positions and developed a classification system to categorise spinal pain problems.

‘‘Everything I know I learnt from my patients. I did not set out to develop a McKenzie method. It evolved spontaneously over time as a result of clinical observation’’

McKenzie went on to write and publish books so people could manage and treat their own back pain, such as “Treat Your Own Back” first published in 1980, with the latest edition being published in 2011.

Robin McKenzie created The McKenzie Institute International in 1982 and led its growth into a worldwide educational organisation. Physiotherapists, doctors, chiropractors and other allied health professionals in 40 different countries have been educated in the McKenzie Method and the expansion of The McKenzie Institute’s Education Programme continues to grow.

On the 13th May 2013, Robin McKenzie died peacefully at his home in Raumati, New Zealand, surrounded by his family.

In 1982 Robin McKenzie was made an Honorary Life Member of the American Physical Therapy Association, “in recognition of distinguished and meritorious service to the art and science of physical therapy and to the welfare of mankind.” In 1983 he was elected to membership of the international Society for the Study of the Lumbar Spine.

In the 1990 Queen’s Birthday Honours, McKenzie was made an Officer of the Most Excellent Order of the British Empire. Also in 1990 he was made an Honorary Doctorate of the Academy of Medical Sciences of Russia.