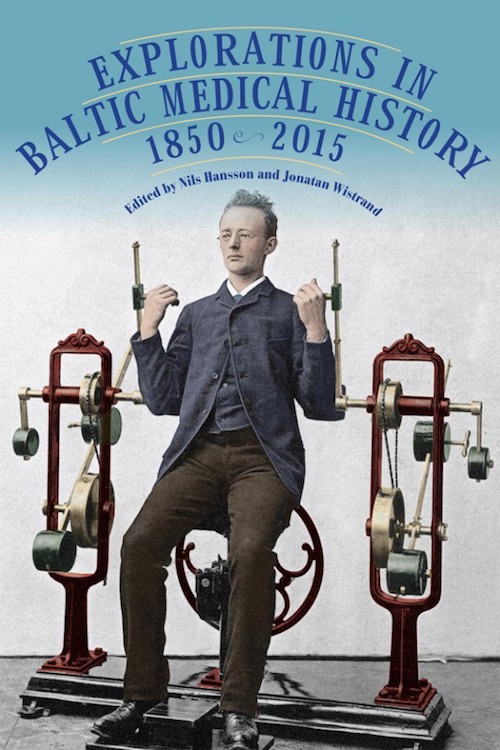 Many of you will know of the pioneering work of Anders Ottosson, whose histories of mobilization, kinesiology and the gendered basis of physiotherapy history were some of the first critical scholarship to be published in the field.   Well, Anders along with Michaela Malmberg published two chapters in a new book titled Explorations in Baltic Medical History, 1850-2015. The book, edited by Nils Hansson and Jonatan Wistrand covers includes 10 chapters from a range of authors and subjects, ranging from the Politicization of the Anti-alcohol Movement in Pre-independence Estonia, to Sanatorium Narratives from the Baltic Sea Region. Here is a short excerpt from Anders’s chapter, titled Gym Machines and the Migration of Medical Knowledge in the Nineteenth Century.


Around 1970 Arthur Jones (1926-2007), son of an American physician, launched his training concept Nautilus. It was a new type of gym machine intended to improve exercise and strength training. Bodybuilding had at the time become popular, as epitomized by the movie PumpingIron starring a young Arnold Schwarzenegger. Nautilus machines spread globally and became big business. They were also copied by others and most modern gyms have machinery using similar principles to Nautilus.

Since his early teens Jones had dedicated himself to weightlifting but despite his good he had always felt that something was missing. At the time there was no scientific literature on “exercise physiology” to guide him. For that reason, he had to design his machines in a scientific vacuum. The shortage of adequate research resulted from the lack of scientists interested in strength training. This was caused by the fact that “it was then impossible to determine the results of exercise for the simple reason that the required tools for any such measurements did not exist.”

It is tempting to consider whether Jones drafted his innovative concept in splendid isolation or not. New inventions and ideas are seldom the fruits of a single individual’s and genius although posterity may easily get this impression. Scholars of the sociology of knowledge and history of science often point this out. Investigations show that successful scientific breakthroughs and innovations are frequently linked to several individuals and intellectual milieus forming a kind of critical mass enabling new ideas to be born. This phenomenon is sometimes highlighted by the Nobel prize ceremonies. Did the laureate(s) actually contribute the most?

Instead of critically examining Jones as an innovative maverick, this article will use a similar approach to a person he greatly. Jones claimed splendid isolation, but he has revealed that there was a man whose work might have helped him if he had only known of its existence. About a hundred years before Jones the Swedish physician GustafZander (1835-1920) had invented a series of machines with basically the same design as Nautilus, or in Jones’s words, in accordance with “simple laws of physics” and a full understanding of “muscular functions “.Like the Nautilus concept, Zander’s machines met the need for resistance: “direct, rotary-form, variable and balanced resistance.” Jones assured though that his innovations did not involve plagiarism: “I did not copy Zander’s work and learned nothing from him, was not even aware of his work until long after I had made the same discoveries that he had made.”
…

Michaela Malmberg’s chapter is titled Gynecological Massage: Gender, Conflict Transfer of Knowledge in Medicine During the Fin de Siècle, and here is the abstract.

This article engages the historically significant yet all but
forgotten issue of the transfer and subsequent disappearance of a
particular and contemporaneously influential therapeutic technique
within and beyond the Baltic region. In what follows I examine the
practice of and professional conflict surrounding Thure Brandt’s pelvic
massage during and after the fin-de-siècle. I propose that two
intersecting hierarchies of the medical establishment –those between
female and male practitioners, and between doctors and physiotherapists–
structured the rise and fall of this treatment. Working to address an
in the historical record with respect to the propagation of the
method around the Baltic, I uncover an aspect of the misogyny inherent
to the field at the time which worked to diminish the important role
played by female practitioners. I also probe the recent re-emergence of
intimate massage in popular culture and scholarly work, arguing that
dominant representations of the method which focus on its sexual
function or relation to hysteria are historically and medically
inaccurate, and obscure the relevance and import of this treatment.”

More details of the book can be found here.