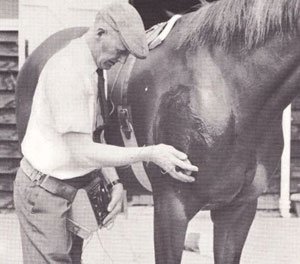 ‘’As humans respond so rapidly to this form of treatment for their injuries, why isn’t it used on horses for theirs?’’

Many will know of Lord Luis Mountbatten, a great british sailor, a notable diplomat, and the last Viceroy of India. Many will know that his murder by the IRA on August 27th 1979 changed forever the history of the British Royal Family. But probably they will not know that his Serene Highness, Prince Luis de Battenberg (1900-1979), Very Honorable Count of Mountbatten of Burma, was also responsible for arousing interest in a new discipline of physiotherapy in animals.

The discovery and development of the faradic current began in the 19th century. Michel Faraday discovered the physical phenomenon of induction, introducing the first type of variable currents that he called , even though the first outstanding results were attributed to Sir Morton Smart for his use of in the treatment of muscle and joint injuries. Mr Charles Strong, a physiotherapist in Harley Street, London, and the personal physiotherapist of the Royal Family, adopted the technique developed by Smart and built a therapeutic device based on the faradic principles, which he called the “Strongbox”.

Like many members of the Royal Family, Lord Mountbatten was fond of the sport of polo. In 1939, while he was being treated for one of his numerous sporting injuries, Mountbatten asked physiotherapist Charles Strong whether the faradic Strongbox might be applied to animals. Strong applied the treatment to two of the Viscount’s lame ponies, and they showed an amazing recovery. From that point onward, Strong became a passionate advocate for the application of physiotherapy in animals.

The Strongbox worked by applying a low-frequency current to the body, through electrodes. These impulses claimed to stimulate the damaged muscle, the blood lymphatic circulation, reducing pain and improving healing. The device, it was argued, had no curative effects itself, but the effects of rhythmic contractions in the muscle created the conditions where healing occurred more easily, for example, increasing blood circulation
and activating the elimination of those substances that, of staying stagnant, could cause permanent disability (Strong, 1967). The sensations were well accepted, even by nervous racehorses.

Strong summarized the benefits of his treatment as follows:

Strong was the physiotherapist of the British Royal Family for many years, treating polo ponies, racing horses and the members of the Royal Family, and in 1974 he was Knighted for his services to medicine. HRH Prince Philip, Duke of Edinburgh, wrote this tribute to Sir Charles Strong:

“Physiotherapy is usually associated with the treatment of people. Sir Charles Strong broke new grounds by adapting his apparatus of faradic currents to the treatment of animals and, in particular, of horse injuries. At the time that I played polo, he treated me with all kinds of injuries, but I also had good reasons to be grateful for his ability to treat animals. There were many occasions, in which he managed to get the ponies to recover in time for important matches. Sometimes I had the problem of deciding which injuries should have priority, mine or those of my horses. The Queen herself requested her services to treat her race horses and I think she once treated a boar stallion on the farm in Windsor for a contracture in the back. He was a true pioneer and many animal owners have reason to be grateful for his initiative. “

When Strong died, his work continued to develop in South Africa. His student, D.M Winks Greene, continued to treat the musculoskeletal injuries of horses, and in 1984 she became one of the founders of the UK’s ACPAT (Association of Chartered Physiotherapist in Animal Therapy), the first special interest group established anywhere in the world dedicated to the promotion and defense of physiotherapy in animals.

The creation of this association has been followed by other countries such as Holland (Dutch Association for Animal Therapy, 1989), Canada (Canadian Horse and Animal Physical Rehabilitation Division, 1994) and Australia (Australian Animal Physiotherapy Association, 1998). As well as Finland,
Belgium, Ireland, the United States, Switzerland, Sweden and Spain (AEFA).

In 2011, the IAPTAP (International Association of Physical Therapists in Animal Practice) became a recognized subgroup of the WPCT (World Confederation for Physical Therapy), composed of animal physiotherapy working groups of the Physiotherapy Colleges of ten countries.

In Spain, the first Animal Physiotherapy Work Committee was created at the Physiotherapist College of Catalonia in 2002. Currently, since 2014, the Working Group of Physiotherapy in Animals of the Spanish General Council of the Official Colleges of Physiotherapist (CGCFE) works at a national level, for the promotion, development and defense of this speciality.

There is much to do in this field in terms of regulation, investigation education, but thanks to Sir Charles Strong and the many therapists that , physiotherapy for animals now has a much stronger profile within the profession and offers exciting opportunities for physiotherapists.

Maria Calatayud is an equine physiotherapy practitioner from Valencia, Spain. Maria is currently a PhD student in the Physiotherapy department of the CEU Cardenal Herrera University. Her Masters degree in Physiotherapy and Veterinary Rehabilitation was gained from IACES (Madrid), accredited by the University Physiotherapy School Garbí (University of Girona). Since 2014 Maria has been the Coordinator of the Special Interest Group in Animal Physiotherapy from the General Council of the Official Colleges of Physiotherapists of Spain. Maria has presented multiple papers and posters on the topic of equine myofascial trigger points and has travelled the world attending educational programs on animal health.